Last couple of weekends were spent in San Jose(again this year!) and Seattle respectively! Though Seattle happens to be my home-city, this weekend did not fit the just-another-weekend in Seattle category!

Another San Jose visit was planned without any hesitation by a huge fan of the God of music - A R Rahman - a fan who has always dreamt of hearing the maestro live! But when the weekend came, our excitement was dampened by the postponement of the concert. The trip still remains amongst the memorable ones for it will be remembered by the times we cherished with friends. After a long, long, tiring drive to the Bay area, I will not be exaggerating if I say that my spirit for the trip was regained just at the sight of my friends when we reached there. From there onwards, there was no looking back! We started with a grand lunch, followed by a barbecue party at Half Moon Bay later in the day. The beach, the beautiful sunset, the talks, the jokes, the pranks, the food, and the drive through the dense fog were all the pieces of a "dream evening" collage! Some of us were engrossed in food, others in the talks, one of us was busy capturing these moments in his lenses, and some of us gave memorable poses for his collection! Even nature couldn't stop itself from portraying one of the best sunset pictures in front of our eyes! 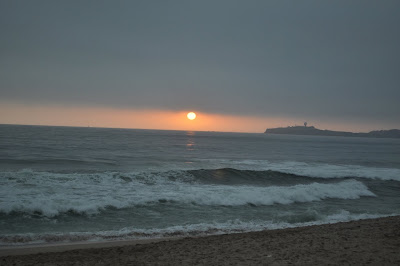 The next day in the Bay area was spent visiting friends and family and catching up on all the latest and greatest happenings in everyone's lives! A post dinner session of desserts and more talks with certain not-to-be-named Indian television shows in the backdrop and a successful attempt at a "Hum saath saath hain" snap was quite an unusual but memorable time from the trip!

No sooner had we gotten over the hangover of this trip than the long weekend followed and this time a couple of friends from Bay area felt like teasing the Seattle sun but the sun hid behind the clouds for most of the time! The weekend began with a soccer game that happened while I was still dreaming, and then a drive to Mount Rainier that I distinctly remember since I was driving :) Snow fights, in fact snow war along the Nisqualy Vista trail interspersed with posing for our cameraman was not easy for me, especially since I was the sole warrior defending the Northwest side, but nevertheless was full of thrill and chills !!! In the peace time, Mount Rainier showed its true colors and left us marveling at its majestic look all over again! I wouldn't be doing justice to what we saw, and so let the pictures convey here. Our next day seemed to fly by with a drive to the Alki beach, Readhook brewery, Canam pizza and a certain not-to-be-named Indian movie with Independence day fireworks show seen from our deck! 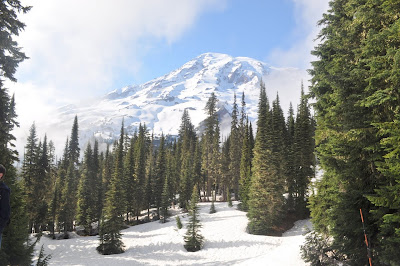 My eventful but no suspense filled story of the 2 cites ends. If you are still there, you wouldn't mind a happy note that its mid July and finally the sun is enjoying outside daily while we are enjoying as well!