My diary from the Zion & Bryce trip

7 friends from 3 cities set off on their 3rd venture together on the Labor Day weekend this year to sign off 2 more US National Parks from their list of parks to explore! The chosen ones for this expedition were Zion and Bryce National Parks in Utah. Since we were all coming from several cities across the West coast, a meeting point was to be decided and the closest city to these parks, Las Vegas, was an obvious and unanimous choice. Since we all know the ground rule "Whatever happens in Vegas stays in Vegas", this blog will focus only on the Zion and Bryce memories from the trip and conveniently leave the Vegas nights out of print (though certainly not out of mind!). 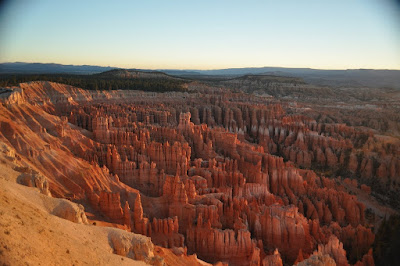 After a long Vegas Friday night behind us and an early lunch, our journey to the one of the most scenic natural wonder began. The 5 hours on road breezed by in the company of good old friends, music, games, food and fun. The early signs of what was in store for us came as we reached close to the park and saw some unbelievable stone structures on either sides of the road. We stopped at the park entrance sign for our customary group snap and then halted at several vista points within the park. The view of the canyon is breathtaking and unbelievable. The erosion over many hundreds of years has led to a natural pattern formation on the rocks, which almost seems like delicately chiseled stonework by hundreds of sculptors. When you set your gaze on this marvelous canyon you also realize that there is more detail and synergy to the reddish, brownish, orange tinges to these structures than meets the eye. After sinking in the reality of this picturesque place and capturing it in our lenses for future pondering and reminiscing, we called it a day and supposedly headed for some rest at the Best Western hotel. We played a card game called Dalmuti which was completely dominated by one of our friends, and we played until he lost a round for the first time. Whoever coined "sadistic pleasure" was a wise man! :) Pillow fights and an iPad and iPhone app "Talking Tomcat" advertised by our Apple savvy friends added to the already entertaining session of watching our favorite Hindi movie "Welcome" for the millionth time! 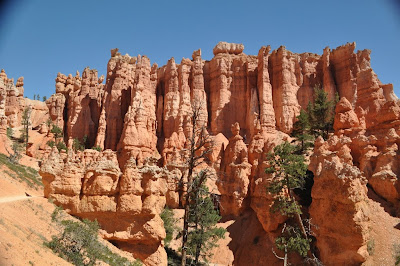 For a group that deeply and whole-heartedly values food and sleep and leisure, getting up and winning the race with the sun for the first spot at the Sunrise Point in Bryce canyon is truly the most remarkable feat of the trip. As the sun's crisp rays touched each layer of the canyon, it gradually brought the dark hidden patterns of the rocks into bright shining visibility. We then rewarded ourselves with a lavish breakfast at the hotel and set off on our hike into the deep corners of the canyon. The trail head was 0.4 kms from the Visitor Center and the 1.8 mile hike though short was not an easy one with the steep uphill climb on our way back. This Queen's Garden hike was filled with close encounters with the amusing shaped rocks and arches and beautiful lookouts into the nooks of the naturally sculpted canyon walls. We undoubtedly captured the most amazing photographs posing beside these marvels. At our next destination, Zion National Park, after a 2 hour drive from Bryce, we stopped at the park sign for a group snap. The 2 photographers of the group gifted the rest of us one of the funniest memory of seeing them run a few meters towards the sign setting auto click on the cameras. Zion has a majestic charm of its own. In striking contrast to the delicate patterns of Bryce, Zion boasts of huge sandstone mountains formed by the pressure of flowing river water and other geological activity over time. We hiked a short trail in the evening and were humbled by the enormity of the rock walls on either sides. After the sun left to explore the other half of the world, the dark trail roofed with star filled sky became scary and fast paced. We realized that this was an apt time for narrating stories about snakes and ghosts and wild animals revealing their hiding spots at dinner time. At the end of this trail, our thirst for some adventure was not satiated enough, so we went star gazing in a dark, secluded corner of the park. While deeply engrossed in identifying constellations, a random unrecognizable sound of an animal from the dark was followed by all of us jumping into the car, locking the doors to discover that no one took the driver's seat. So we tasted our share of peril for the night before settling down in the Best Western again in Zion. 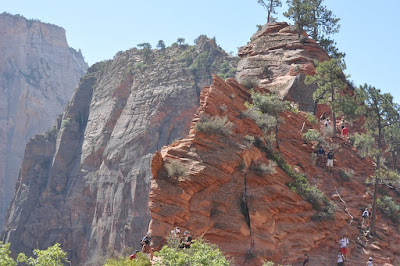 Our target for the morning was Angel's Landing, a 2.5 mile(one way) hike to a landing on one of the peaks for a grand view of the Zion canyon. We geared ourselves with heavy breakfast, backpacks filled with water and snacks, and a lot of enthusiasm and reached the trail head in a bus operated by the park authorities. From then onwards the word on everyone's mind was "Lakshya" (meaning target). We were astounded by the trail path that varied from steep winding zig zag pattern to long stretches of upward slope accompanied by several photographic elements like mini-caves and crevices in the walls seeking our attention for exploring and capturing in our lenses. It was an arduous hike and we rejoiced at our first milestone - Scotts Lookout. The last 0.5 miles ahead of us kept our hearts pounding heavily. This stretch had no paved trail, and involved almost rock climbing skills with a chain to hold onto while looking into the 900+ feet deep valley on the other side. Setting each foot on a stable but slant rock while trusting the grip of my hands onto the chain for the safety of my life sent some chills down my spine. After about a quarter of this stretch, one of us realized his fear of heights and this was not a good spot to be in. So he and I backed out of this mission, while the rest of our group went ahead and hoisted the flag of accomplishment at the peak. I strongly recommend attempting this hike, if only to realize your hidden fears and I hope to mark my footsteps at this peak some day for sure. After the relatively easy downward hike back to the base, we saw the other mystifying spots in Zion in a bus ride through the canyon. A well deserved lunch and a drive back to the entertainment capital marked the end of our Zion experience.

Words and pictures may fail to justifiably match up to the memories that we hold from this trip. The destinations left us in awe of the wonders of nature and a strong beckoning for another visit. Looking forward to exploring the unexplored ...

Awesome description, one correction though :-)...when we all jumped into the car, the passenger seat (next to the driver) wasn't taken :D